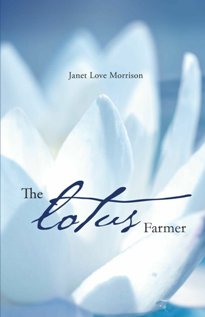 In the East, the lotus flower symbolizes the transformation of one's soul, one's journey and the rising of one's inner being. In "The Lotus Farmer" hairdresser George delivers ancient teachings to a group of women from profoundly different belief systems who meet weekly at his beauty salon. In time, as they absorb what George has to share, they recognize their possibilities and discover that rising to be the best they can be as a human supersedes all their differences.

Janet Love Morrison is an award winning author (Canada’s Legendary Ski Team – The Crazy Canucks, with a foreword by Peter Mansbridge) and a member of the Editors’ Association of Canada. She started editing in 2004 for Masters’ World magazine in Kuala Lumpur, Malaysia. Since then she has embraced a wide variety of texts including manuscripts, websites, theses, and more.

Her writing has appeared in the Pique Newsmagazine, which is published in Whistler, BC, one of Canada’s famed ski resorts; the Globe and Mail, one of Canada’s two national newspapers; Ski Canada, Canada’s ski... more