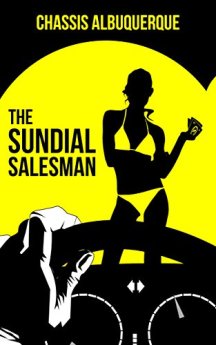 `This is a life where you have to take what you can when you can while you can - because you can't take it with you.'

Caught in a hilarious web of mistaken identity, adultery & blackmail that slowly unravels with disastrous consequences, The Sundial Salesman is the gritty, autobiographical account of morally vague Ealing Broadway and his sex-depraved boss, the scheming, Mason Shimansky, CEO of one of the most powerful companies in the world and whom Broadway attempts extorting.
Only Shimansky has other plans for him.

`I need a reason to leave my wife,' Shimansky tells him.
`Won't you wife be annoyed?' Boradways asks.
`Probably, no doubt, she usually is,' Shimansky said.
`That's very complicated, even worse, what if she forgives you - what then...?' Broadway wonders as Shimansky outlined his plan.

Can Broadway help prevent a young woman's death and redeem his own seamy existence? All just a normal day in America’s downtown forgotten wasteland, Tokyo – a lot like Chinatown, only Japanese. If you enjoyed reading Fear And Loathing In Las Vegas, One Flew Over The Cuckoos Nest and Bukowski’s Post Office, while there’s no suggestion there were any actual children involved in the above literary mutation, you no doubt will enjoy reading the savvy, punchy prose of The Sundial Salesman...!