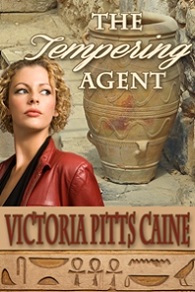 Dr. Priscilla Hackling finds herself thrown back into the murder investigation of her fiancé, Trey Whittington. While she was a suspect three years ago, she’s now working with the police to find the murderer, Egyptian artifact trafficker, Zarka El-Din.
Tricked into participating in a sting operation to catch the killer, she and Agent Donnie Barnes travel to Siwa. They are drawn to each other but Priscilla, overcome by personal ghosts from her past, decides a relationship isn’t possible.
Priscilla realizes she’s the bait in the ruse and uncovers others involved with El-Din. Will she and Donnie reconcile and unravel the reason behind Trey’s death before El-Din kills her, too?
The Tempering Agent - Available from Amazon.com

Victoria Pitts Caine is a native Californian and lives in the central portion of the state. Her varied interests include genealogy and exotic gemstone collecting both of which she’s incorporated into her novels.

The author has received recognition in both fiction and nonfiction from: Enduring Romance top 10 picks for 2008, William Saroyan Writing Conference, Byline Magazine, Writer’s Journal Magazine, Holt International Children’s Services Magazine, and The Southern California Genealogical Society. Her first novel was published in 2007 followed by two more as well as novellas and... more

Other books by Victoria Pitts-Caine