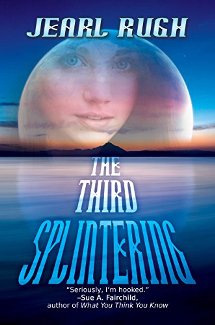 Zoe has spent her fifteen years being nothing but average. But when Silone and three other mystical men appear, she unearths a forgotten truth lying dormant since infancy. More freak than anything normal, she’s a half-human, half-extraterrestrial shape-shifter.

Certain they’ve abducted her parents, now, in a relentless pursuit, they hunt her. On the run, even with her new reality wrenching every thought and emotion, she manages to reach an unfathomable decision. To locate the otherworldly place her parents must be held, she needs to surrender to her pursuers. But to rescue those she cares about, the one thing she requires most—warrior’s grit—is as elusive as her hope of success. Now, ravaged by despair, dread, and self-doubt, she confronts the destiny from which she might never return.

Defying the limitations of imagination, the worlds-colliding suspense thrusts the story forward as the extraordinary characters unpack intricate layers of mystery.

Other books by Jearl Rugh