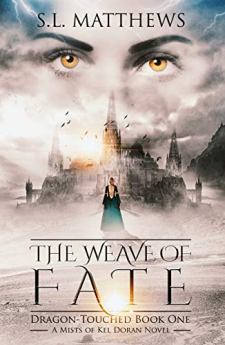 The city of Wyvern’s Rest has fallen…

The feud between the capital cities of Cambridge and Sephyra has reached a boiling point, leaving the former “Jewel of the Highlands” a ghost of its former glory. Those with the means to live and the will to dream have already fled the city. Those lacking remain, condemned to bury their sorrow while the walls crumble around them. Lawlessness and poverty have overtaken the streets, and as the days grow longer, the shadows of the abandoned Outer Quarter loom ever darker.

Ava spends her days tethered to her prison, the belly of an old, stone inn, overlooking the docks and the familiar, sea-side market. She leans on her friends for innocent laughter and talk of unimportant things. Every day, the tavern fills with the hopes and dreams of those fleeing for brighter horizons; and every day, Ava watches them leave with the simplest wish…to join them.

Little does she know, her fate is woven to the enormous, crimson carriage that creaks through the shadows of another forgotten morning. The odd-shaped man who emerges from the carriage carries two simple things: an old, leather satchel and a sinister secret. One will free Ava from her prison. One will forever seal her tomb.

Both will alter the course of Wyvern’s Rest forever.

The Weave of Fate | Available from Amazon

The Mists of Kel Doran is a serialized, epic fantasy series. The Weave of Fate is the first book (of about 24) in the Dragon-Touched Season.

While each book will have a stand-alone arc, many side plots will span across several books, with a larger, central theme spanning the entire Season. My intent is to create a truly immersive fantasy world, providing a rich, thematic storyline throughout. Now, if you're ready...enter the mist. United States
Scott Matthews was born in Oklahoma City in 1976 and has spent his entire life in the great state of Oklahoma. By day, he puts out IT fires...by night, he raises teenagers and herds cats. Or...raises cats and herds teenagers. He's discovering more and more that those two are interchangeable. He's married to an amazing woman and has three great kids. Somewhere in between all that, he writes...
Learn more about S.L. Matthews