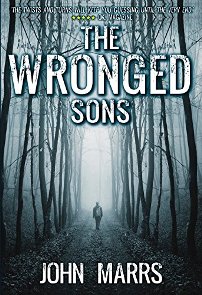 The Wronged Sons is a gripping psychological thriller novel that asks what you would do if the person you loved suddenly vanished into thin air?
Catherine’s cosy life as a housewife and mum-of-three is quickly thrown into disarray when husband Simon disappears without explanation.
She is convinced he hasn’t left by choice as confusion and spiraling debts threaten to tear her family apart.
Meanwhile Simon has begun a carefree new life travelling the world. And he’s determined not to disclose his past to all he meets, even if it means resorting to extreme and violent measures.
But why did he leave?
Catherine only gets her answer 25 years later when Simon suddenly reappears on her doorstep.
During their furious final confrontation, they discover the secrets, lies and misunderstandings that tore them apart, then brought them face-to-face one last time.
The Wronged Sons is author John Marrs' debut novel and is available to download from Amazon, or in print form.

John Marrs is a freelance journalist based in London, England, who has spent the last 20 years interviewing celebrities from the world of television, film and music for national newspapers and magazines.
He has written for publications including The Guardian's Guide and Guardian Online; OK! Magazine; Total Film; Empire; Q; Gay Times; The Independent; Star; Reveal; Company; Daily Star and News of the World's Sunday Magazine.
His debut novel The Wronged Sons has been downloaded 14,000 times world-wide in just six months.