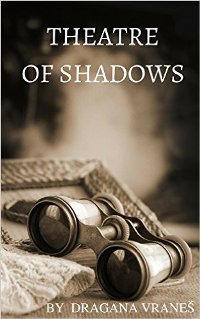 Adrian White, the main character of crime/mystery novel "Theatre of Shadows", is a failed writer who offers his literary services for a small compensation. That is, he writes first five chapters of a novel for clients found by his partner in “business”, one Mike Bergman, a lawyer. He then lets his clients handle the rest of the novel. When White goes to a deserved holiday in a classy summer resort and meets an extravagant blue-blooded Madame Marceau and her daughter Norma, things start to get more complicated.

In a magnificent theatre, built within the catacombs beneath the mansion, White is required to watch performances that seem oddly familiar to him. He soon realizes that the plays are based on the novels whose initial chapters he himself has written. Soon he’ll face a terrible truth: he was kidnapped in order to choose the best theatrical performance. There can be only one winner. The reward for him is - life.

With the help of a girl called Ellen, he finds a secret passageway, and the two of them flee through a maze of catacombs. What follows is a dramatic chase… The escapees desperately wonder who the creator of the Theatre of Shadows might be… The discovery they make is astounding, and the consequences painful to all.

A little bit morbid and scary

A little bit morbid and scary, but very interesting.