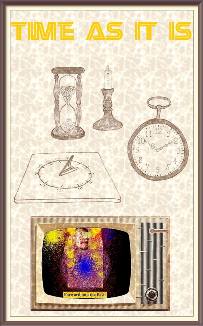 The Time machine is here!
Is it even possible?
To travel in time?
In this book You will find the answers..
Please, read Chapter 10.

What Is The Time

We can define time as a process of comparison of flows of two processes.
We compare the flow of one process with the progress of another one.
We may ask:"How often one process repeats while another one is still not ends.
To do the comparison we can use one process as standard(usually this is repeatable process)
and compare with it the measured one.
As an analogy we can use the procedure of finding the length of the object.
We count how many times smaller object(measuring stick) “fits” in the measured one.
Then we “measure the time” we count how many times faster(shorter) process will “fits”
in the bigger(longer) one.
Obviously, the shorter the standard process in accordance to the measured one -
the more accurate result will be obtained.
Let’s create hypothetical world.
World where only Drop Clock in use.
What is the construction of this clock? Here it is.
In reservoir, filled with water, in the bottom, there is a small hole of such size,
that water don’t flows threw this hole but drops.
Under reservoir, at some distance, there is thin metal sheet fixed only by one side.
Then water drop hits the metal sheet, it is create strong noise.
Let’s assume the observer compares the process of water dripping from this clock
and the process of candle burning. He is “measuring time”:)
After he finish the counting how many drops of water fail while the candle was burning,
he may say, for example:” Candle burned out in 1758 drops”.
Or he will measure how fast the sportsmen run a mile.
He may say:"It’s took 177 drops to run a mile”.
Unusual to hear the word “drop” as measuring unit to judge a speed of the process.
But, since we now where is this from, we will say what such practice has rights to exist
in such hypothetical world.
Where is a second, a minute, an hour , a day , a month, a year comes from?
In our real world we also start to compare one process to another in attempt to find
the measuring unit which can be understood by any body around us.
In the beginning people live in small groups and did not now any measuring units, but Day.
All their primitive life was connected with light period of the day and dark period of the day.
At night, the danger was all around, so they hide in the caves.
As soon as the Sun arise, they now new day is coming.
So they count the days if they want to say about someones life, how long he has live.
At some point, because they believed that Moon was born and die, after this again and again
born and dies, they start use this event as a measuring unit.
They start measure length of the human life not by days but Moons.
They may say:"My father was lived for 457 moons”.


At some point they discovered that seasons repeated all the time,
and it is connected with the Sun.
Moon always exists, but get in to the Earth shadow periodically.
Connecting together all this events(days,months,years) was not easy task.
But it was done in the first primitive countries.
Even at the beginning it was believed that it is the Sun rotates around the Earth,
this was not the obstacle to find the period by itself.
It was done in many ancient civilizations. It is called a Year.
The period of rotation of Moon around the Earth they called a Month.
They believed that there is 12 month in the year.
That how the lunar calendar was born.
Ancient astronomers make in different countries same experiment.
They count the days between two identical positions of the Sun in the skies during the year.
Was used such events as Fall or Spring Equinox.
In different places they got the same result which satisfies the needs of the people of that time.
The length of the Year was 365.25 days.
Thats how the Sun calendar was born.
Since the life of the people connected more to the Sun than the Moon,
this kind of calendar prevail and used in most countries to this days.
But where is a second, a minute, an hour came from?
The Sun Dial is the mother who give us this small fellas.
An ancient Egyptians, probably, was the first people who use such device.
They divide the dial from the dawn mark to the dusk mark by 12, and call each this part an Hour.
At summer time an Hour was long, at winter - short.
And only at the fall or spring Equinox such device was shown “real” Hours.
Same people divide the Hour by 60 and called each of this part a Minute.
After this they divided each minute by 60 and called it a Second.
Sun dial was good to see a minutes, but seconds was impossible to observe.
I believe someone, somewhere was must to invent the sun dial that use a mirror.
Mirror was placed on the high tower, for example.
The sunbeam from this mirror will move across the dial, and this dial located far from the mirror,
so person can easily observe how the sunbeam moves from one second mark to another.
Probably it was never invented at that time, people was satisfied with minutes.
Today it can be interesting attraction.
Sand dial was invented, water clock was invented.
But seconds was hard to count with such a tools.
And people just counted by own self!
Someone, someday find out that if you will repeat some phrase constantly while one minute
sand clock runs, it may fit in this period very precise.
In different countries it will be different phrase.
In the USA it will be:"One thousand” plus the number counted.
For example the person start count:” One thousand one”,"One thousand two”,
"One thousand three”.........."One thousand twelve”, and at this moment the process has ended.
This means that this process was flows for 12 seconds.
In medieval time was invented the mechanical clock.
Finally the chronometer and stopwatch was invented.
Atomic clock shake the human ability to imagine how accurate this machine can be.
But does not matter how accurate this tool can be, the idea is the same.
How many standard processes will fit in the measured one.
Now, after we are studied the history of expression “Time”, we can say that time is a procedure,
or description of procedure, or logical, numerical expression which can be use in logical operation
to define the stages of some process.
You can’t manipulate with time, can’t create it or destroy it.
You can execute it or not(if time is a procedure), you can use this information in logical procedure
or not(if time is a logical or numerical expression).
But even it is sound paradoxical, expressions like “time disappeared” or “time stopped”,
can reflect very real state of the matter in this world.
“Time don’t exists” - if there is no material objects, no events, no processes,
no time as a result of the absolute absence of the matter.
“Time disappeared” - if cool down all in this world to the absolute zero, when all events,
but the fly of the frozen objects will stop.
And even the objects will still fly throw the Universe, nothing material will be able
to execute the Time, compares one events with another.

Time as It is
This book is available from Lulu

United States
Hi! My name is Aleksandr Anufriyev. I am possibly the world’s biggest fan of pancakes. And books fan too. So, one day I will write book about pancakes:) I am came to America from Russia in 1995, and now reside in Lansing, Michigan. Reading helps me a lot in studying English literature and language. I love to read. I love to read books, but I also love to write. In 2015 I finished my book...
Learn more about Aleksandr Anufriyev