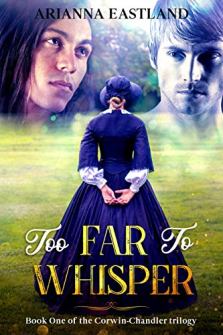 In 1654 New England, 19-year-old Rosalind Chandler vows never to marry, and to swiftly discourage any man who attempts to change her mind. Her reasons for remaining unwed are valid, yet she never has spoken of them to anyone, which causes gossip and speculation to run rampant in the town.

Due to some clever manipulation, Rosalind’s mother, eager to see her eldest daughter wed, arranges for Rosalind to become the live-in companion of the ailing wife of the town’s powerful magistrate – who just happens to have two handsome and charismatic sons. One son, Nathaniel, immediately is attracted to the lovely blonde, but Rosalind, adamant about never becoming any man’s wife, is not receptive to him or his efforts to woo her. She does, however, find herself inexplicably attracted to one of the Corwins’ field workers – silent, dark-eyed and mysterious – a “savage” in the eyes of the townspeople.

Nathaniel is offended when he notices Rosalind eyeing the muscular “heathen” as he works shirtless in the field. This drives Nathaniel to become even more determined to win her for himself…even if it means breaking the law. But then, the son of a magistrate pretty much can get away with anything…

This is my first attempt at writing a romance novel. My goal when I wrote it was to make an emotional impact on the reader in every way - love, joy, sadness, anger - which I hope I've accomplished. Also, most novels that feature Native Americans are westerns, and I felt it would be nice to highlight the Northeastern tribes for a change, as their customs vastly differ from those in other parts of the country. Wanting to be as historically accurate a possible, it took me four years to complete this manuscript. (Due to some sexual content and violence, I would not recommend this book for anyone under 16).

When a DNA test revealed that Arianna Eastland was part Abenaki, something she hadn’t previously been aware of, she became inspired to research the Native-American culture and history in the areas of Quebec and New England. One book she read alleged that many women who were kidnapped and held for ransom by Native-American warriors often opted not to return to their homes because they became infatuated with their captors. This inspired Arianna to write her first historical romance, TOO FAR TO WHISPER, set in 17th-Century New England – a project that took her over four years to complete.... more

This historical romance novel I could not put down! Everything about made me feel I was involved n the story. So far it is the best book I have read this year!