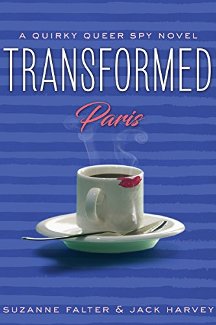 Transman spy Charley MacElroy travels to Paris to help French authorities break up a Neo Nazi plot to scatter dirty bombs throughout the city. His older lover Electra comes along to study French, but she soon discovers Dickie Borque, an sinister British aristocrat with lavender hair, may be behind the plot. Charley, however, is not so sure.

Meanwhile, she and Charley begin having love troubles when he suggests opening up their relationship to suit his pansexual desires. After discovering that he may have been fooling around with his attractive new male assistant, Electra moves out in a huff. Soon Charley is wandering the quays alone, trying to find the dirty bombs while wistfully longing for his love.

Electra enlists the help of Dickie’s feisty eighty-something milliner, Odile, to break up the plot. But then suddenly, Electra disappears. Now Charley must search frantically for both the bombs and Electra amidst the cafes, conversation, and the gleaming, rainy streets of Paris in winter.

This book is about the city I love the most ... Paris. I try to spend a few months there every year, and I did so to research this book in late 2015. At the time, the city was somber. The Bataclan attacks had not happened yet ... and Parisians were wary. The 'migrant issue' was on everyone's mind, even without a recent ISIS attack. I left Paris 3 days before the Bataclan, the local stadium and my beloved Cambodian restaurant were attack, and patrons gunned down. This book is an homage to the indefatigable spirit of Paris that lives on ... and will never be defeated.