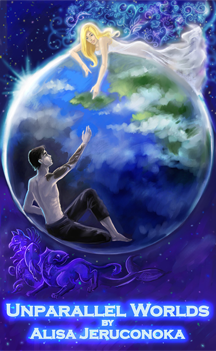 ‘Unparallel Worlds’ is a unique YA fantasy novel like no other of the same genre. It offers you to take a fantasy trip to a unique planet called Adriana. One half of Adriana always faces the Sun, creating a force known as Light Energy. The other half always faces the darkness, creating a force known as Dark Energy. ‘The marriage’ of these two vital forces allows the planet to flourish but it also resonates out to the rest of the universe, allowing worlds within it to exist and survive.

Each side of Adriana has its own civilization of Light and Darkness. For as long as history tells both civilizations have existed peacefully together and supported the survival of each other through sharing knowledge, trade and energy resources. Even marriages between the two sides were not restricted, as this helped strengthen the bond between each nation. It was then that the Great War between the light and dark sides began. The war was long and brutal and although no side was winning, each was destroying the other.

Try to unlock the answers with the characters through epic and magical adventures, seek the prophecy in deeply hidden secrets, experience betrayal and sacrifice, and find hope where you least expect it. ‘Unparallel Worlds’ will offer you a unique opportunity to fight against genetically modified warriors of invisible Dark Army who have been created during the experiments with animals, fish, birds and plant genes. You can befriend mythical creatures and nature spirits or you can try to defeat a half-breed vampire, or may be even werewolves and serpents.

United Kingdom
Ali Muhammad ‘The man who has no imagination has no wings.’I’m a YA Fantasy Author Alisa Jeruconoka and I’m from London. Since I was small my mum sparkled my imagination by teaching me a valuable lesson that imagination is the key to free my spirit. That was how we discovered a time portal to get to the alternative dimensions, worlds, universes and realities. As I grew...
Learn more about Alisa Jeruconoka