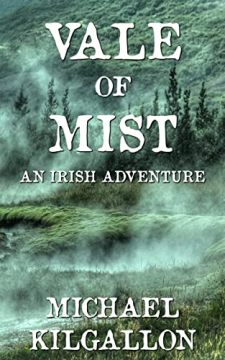 A mystery spills out from Ireland's ancient folklore.

Two men walking through the beautiful Irish countryside become involved in an intriguing mystery. The ancient paths lead to an adventure concerning the ancient past.

Jonjo conjures up a half-remembered tale of the ‘Vale of Mist’. The vale gives anyone who finds it a guarantee of a year of healthy life. Initially, the search for the vale is just a means to encourage Sean to take some exercise. As the two take to the paths it becomes something more. They become engrossed in the faith of the pre-Christian era and uncover such beliefs existing still. Literally and figuratively, just below the surface.

An expanding cast of local, colourful characters become involved. The two friends slowly realise that they are inadvertently on a mission to help the community. A joking request for help from the town policeman to investigate a sighting of a ghost leads to genuine supernatural encounters.

Many of their adventures end at the local pub, and their story is full of jokes and witticisms old and new. The overall sense is a gentle, comic, feel-good tale, but there are deeper strands.

The story is also about the redemption of Sean. His avaricious side is tempered by their encounters. Jonjo, too, changes for the good through Sean’s influence.

There are genuinely chilling and exciting adventures as they find out more about the pre-Christian civilisations and beliefs. The realisation of how much the ancient concepts have informed modern religion surprises the men. They become, at times, philosophical, articulating their feelings about the meaning of life.

The descriptions of the changing of the seasons form the backdrop of each chapter as the adventure unfolds, culimnating in a chilling climax.

Humour, friendship and an ancient mystery all combine in this thought provoking tale set in the Emerald Isle. United Kingdom
I took early retirement from teaching and now I am a full time author. I live on the west coast of England. I am married with two grown up children and two grandchildren. I graduated many years ago with a degree in Politics and Modern History. My interests include football, archaeology, science and reading.
Learn more about Michael Kilgallon