Walks: A Collection of Haiku 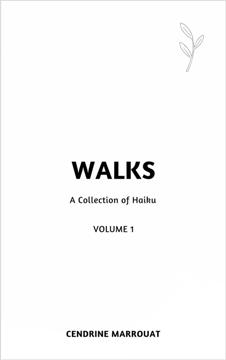 Haiku are unrhymed poems consisting of about 17 syllables spread over three lines. This poetry form started in Japan and has been very popular in many countries around the world for decades.

Haiku force you to be concise. They teach you impactfulness. As such, they are the embodiment of the "Show don't tell" technique. A technique that allows readers to experience stories in a more personal and meaningful manner.

"Walks: A Collection of Haiku (Volume 1)" is not just a celebration of Cendrine Marrouat’s love for haiku. It is also an invitation to enjoy the flitting moments that make life beautiful...

Cendrine Marrouat (pronunciation: “san-drEEn mar-wah”) is a photographer, poet, author, and French instructor. Originally from Toulouse, France, she has called Winnipeg, Canada, her home for 16 years.

Cendrine specializes in nature, black-and-white and closeup images. Her photography seeks the mundane to capture the fleeting, but true beauty of life in its many forms.

Cendrine is passionate about haiku. She has studied the Japanese poetry form extensively and written many pieces since 2006.

In 2015, Cendrine was recognized a Top 100 Business Blogger by BuzzHUMM.... more

Other books by Cendrine Marrouat