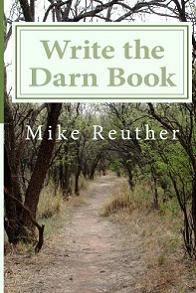 Many people dream of writing a book, but few ever getting around to doing it. Why? Mike Reuther, author of "Write the Darn Book", believes too many aspiring writers set themselves up for failure by believing it's difficult. It doesn't have to be. The key is writing from one's heart to allow for the free flow of words to come pouring out.

In no time at all - a matter of weeks - a writer can have a manuscript ready to be edited and eventually published. The book also covers literary agents and the publishing world. Drawing from some of his own experience, the author reveals mistakes to avoid in writing and trying to get published. This book makes it clear that anyone with the desire to write a book can make it happen. And the good news is, it's quite simple.

Mike Reuther is the author of "Nothing Down" as well as the mystery, "Return to Dead City" and "Write the Darn Book", a self help guide for aspiring authors.
Mike became a writer because he was first a reader. Books such as "Catcher in the Rye" and the works of John Steinbeck, James T. Farrell and Thomas Wolfe were big early influences. He has been writing his entire adult life. With his goal long set on becoming a published novelist, he endured the usual setbacks that writers face - rejection after... more

Other books by Mike Reuther