A farewell to my father, a man who should have died sixty years ago. A true story. 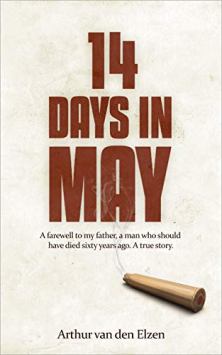 On May 1st 2011, I traveled from Ecuador to my native country to say goodbye to my dying father. Two intensive weeks followed, where death was constantly looking around the corner, while life was still the focus - his life.

About sixty years earlier, my father survived a serious accident. He was hit by a bullet in his face, a bullet that exploded in his head. Doctors only just managed to save his life. With a new, but maimed face he had to return to his hometown, the small village of his ancestors in the South of the Netherlands.

Back home, he found everything to be exactly the way he left it, but no one seemed to remember him anymore. However, he was determined to pick up his life right where he had left off months before. His former family life, his friendships, his hobbies, his job, and … above all, his relationship with the girl who lived around the corner.

During the two weeks I stayed in the Netherlands, we spoke often about this dramatic period and eventually he asked me to write down his story. With the help of his memories and those of family and friends, but also old letters, diaries, military and medical reports, I reconstructed his personal family history. Embedded though in the inevitable farewell. An inspiring true story.

In the last days of his life, my dad started to live on memories. He had a wonderful life, he told me, but we all knew that he had been through bad times as well. As a young guy he barely survived a shot in his face, a bullet that exploded the moment it hit a bone. He fell to his death, was left on a cold floor, but somehow survived. As a family we all knew bits and parts, but didn’t have the whole picture. After telling his story over and over again, he asked me - the family history writer - to write it down. So it wouldn’t get lost. At first I hesitated, because of the sadness that would come with this task. But while thinking I couldn’t, I told him: “Yes! Of course, Dad, I will, ... if that’s your last wish." Now here’s your story. A true and unforgettable story, I can tell you readers. A story that surely can and will inspire many. Sorry, for the tears I put in, they are for missing him.