25 Stories I would tell my Younger Self 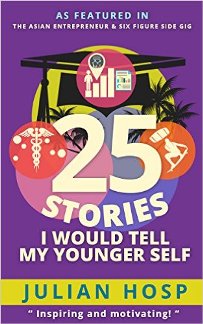 In this book you will find 25 easy to read real-life stories written by Julian Hosp, a medical doctor, pro-kitesurfer & entrepreneur, where each of them contains valuable lessons and take-aways to help you to choose the path you want, make this path walkable and raise awareness how seemingly small decisions affect us majorly.

Learn how growing a tree is similar to building a business, how getting cheated over can actually be good, why becoming a millionaire within the next 10 years can be quite straightforward and much more.

Julian's 25 stories will make you smile, relate, and dream - and inspire you to choose the path YOU want - and make this path reachable by incorporating some or all of his stories’ lessons into your life.

A book for everyone who wants to be inspired to take decisions they are afraid of taking otherwise.

25 Stories I would tell my Younger Self - Available from Amazon

Dr. Julian Hosp is an author, entrepreneur, and leapfrog high performer. Julian was born in 1986 in Austria. In his teens he played professional basketball in Austria and then went on to become a professional kitesurfer for almost ten years. There he wrote his first book, “Kitesurfing Tricktionary”. He graduated from Innsbruck Medical University in 2011, but later he decided to employ his hard-earned skills and discipline in the business world, rather than in medicine. Looking back, he describes that decision as one of the hardest ones in his life, as both his family and friends expected... more