All in the Mind 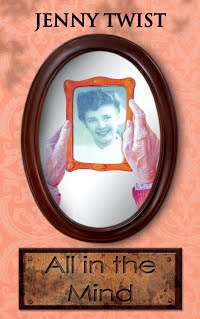 Tilly wakes up in the dark, alone and very frightened. She finds she is in a strange room inexplicably furnished in 1940s style. However did she get here? Has she somehow slipped into the past? Has she been kidnapped? Of one thing she is absolutely certain, she has never seen this place in her life before.
All in the Mind is a fascinating tale exploring the human capacity to overcome any obstacle, no matter how great, as long as you believe you can.
Tilly is part of an experiment working on a cure for Alzheimer's disease. She and most of the other patients taking part in the experiment seem to make a full recovery, but there is a strange side effect.
Tilly and her fellow experimental subjects appear to be getting younger.
Can the same experiment be repeated for Tilly's beloved husband so that he can recover from a stroke? Tilly thinks it can and she will move heaven and earth to make sure it happens.
A charming and thought-provoking story full of reminiscences of a bygone age, All in the Mind also deals with the dilemmas posed by new developments in a society whose culture is geared to the idea that the natural span of a human life is three-score years and ten.

Years ago I read about an old folks’ home where they did the experiment of making the resident’s environment like that of their youth. I can’t remember where I read this or what they were attempting to achieve but I do remember that one surprising result was that the subjects’ hair darkened.

I’ve had this idea lurking in the back of my mind ever since. What if you carried the experiment to its logical conclusion?

In 2011 I entered Nanowrimo (a competition to write a novel in a month) and this was the idea that resurfaced when I sat down at my computer. I have never written so fast and furiously before or since. The story just poured onto the page.

I kept coming across gaps in my knowledge but followed the advice of Stephen King and just wrote it, intending to deal with all that later. When I picked up the manuscript again a few weeks later and got down to seriously working on it I found I had to do a lot of research on the Second World War.

I knew a fair bit already from reading and television as well as from the experiences of my own parents but I needed to know things like what branded goods they used, how the rationing system worked and so on.

I also realised, when one of my characters suddenly got completely out of hand and decided to return to India, that I was woefully ignorant of Indian culture. I knew some from reading and I had, in fact, studied Indian history at university, but I had no idea whether my knowledge would suffice for modern day India. The problem with something like that is you don’t know what it is that you don’t know. I did not realise, for example, that a Hindu would be unlikely to understand Urdu. So I appealed on Twitter for experts on Hindu culture to read and correct it. I had four responses and checked all their comments with Google. Thank you, you wonderful people. You’ve saved me a lot of embarrassment. And thank you, Google. You saved me weeks of work.
My dear friend, Caroline, read the proofs when she was staying with me and suggested the idea for a cover. She painted the beautiful hands. They belong to her mother, Ann Ritson, to whom this book is dedicated. Spain
Jenny Twist was born in York and brought up in the West Yorkshire mill town of Heckmondwike, the eldest grandchild of a huge extended family. She left school at fifteen and went to work in an asbestos factory. After working in various jobs, including bacon-packer and escapologist’s assistant (she was The Lovely Tanya), she returned to full-time education and did a BA in history, at...
Learn more about Jenny Twist