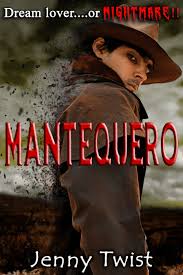 Nobody had ever wanted to kiss June until she met her holiday romance.
Ignacio wanted to kiss her all the time.  But was it just kisses he wanted?
Or did he have a more sinister purpose?
Soon June begins to lose weight.
A lot of weight! Could Ignacio be . . .  The Mantequero!
Excerpt
He was dressed in a very old-fashioned style, even for a mountain villager, in knee britches and a waistcoat, with a wide-brimmed hat shading his eyes, and carrying a large leather bag.  He was a very handsome man, as many Spaniards were, with fine-chiselled features and the typical dark hair and eyes. Only his skin was paler than most, and she didn’t find that unattractive. No, not unattractive at all.
When they reached the little house at the top of the village, she turned to him and said, “This is where I live, Ignacio.”
He bowed his head courteously, letting go of her arm.
She felt a terrible disappointment at the loss of his touch, and she thought, This is it, my one chance.
She smiled up at him. “Would you like to come in, Ignacio?”
His face lit up in a broad smile. “You mean it? You are inviting me in?”
She nodded, and turned her back on him to insert the key in the lock, her heart thudding so loud she thought he must surely hear it.
As they stepped through the door, he took her into his arms, and, pushing the door closed with his foot, began to kiss her passionately. “Oh, my beautiful goddess,” he murmured between kisses. “You are SO beautiful, SO beautiful.” And then, without quite knowing how it had happened, she found herself in bed with him, her clothes abandoned, and he was kissing her all over with that strange, exciting, sucking kiss. And she felt an ecstasy she had never known before.
Buy on Amazon
Mantequero | Buy on Amazon UK

Jenny Twist is a superb author. Read All in the Mind earlier this year - an excellent book with a fascinating plot that twists and turns but never lets you go. Very recommended. Looking forward to reading this one.

Thank you, Chris. I really appreciate your comments. xx

There are two words which sum up Jenny's writing - quirky and idiosyncratic. Expect the unexpected!

Another unusual and intriguing read!

I have loved everything I have read by Jenny Twist. She is a fantastic author and has this brilliant style that is easy going, but very engaging. I hadn't heard of this particular legend before, but Jenny has portrayed the story in a wonderful way. I just love it!

What an intriguing plot. Loved your hot excerpt and the cover is gorgeous. I know Mantequero is going to be a big success.

Thank you, all you lovely people. I DO appreciate your comments. Love Jenny x

This book sounds unusual and intriguing. Congrats to Jenny Twist on this exciting release!

Thanks, Caren. So pleased to meet you Love Jenny xx

I loved this short!

I loved this short story, and can't wait for Mrs. Twist to come up with a sequel!

I am so fascinated with Mantequero. He's such a mystery. Is he good or evil? I wish you every success with this very interesting story.