All the Way to Heaven and Back

Surviving the Loss of a Loved One 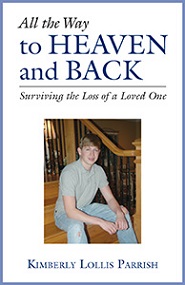 Part crime drama, part self-help, but totally captivating, author Kimberly Lollis Parrish shares her powerful story of love, brutal loss, and crushing grief. When her baby brother Griffen was born, he captured the hearts of everyone who met him, and Kimberly loved him as if he were her own. Growing up in small town South Carolina, he did his best to rise above the cruelty in life, but it slowly dragged him down, finally leaving him dead by the side of the road. His mangled body offered clues, but authorities didn’t seem interested in answers. Ignoring crime scene evidence, conflicting witness accounts, and the marker drawings on Griffen’s own body, they called it a simple drunk driving accident. Broken and bent with grief, Kimberly heard Griffen’s sweet voice whispering, “I love you all the way to Heaven and back” and decided that’s just how far she’d go to find justice. What she found along the way was strength, hope, and her ability to touch others dealing with overwhelming grief.
All the Way to Heaven and Back - Available from Amazon

Kimberly Lollis Parrish was born in South Carolina to an imperfect but loving family. She followed her passion for children and teaching until she was fired for refusing to change the grades of students to suit the whims of their parents. She appeared on “The Oprah Winfrey Show” to share her story, which sadly would not be the only dramatic point in her life. After the tragic death of her younger brother Griffen, Kimberly began speaking publicly about binge drinking and bullying, using her unique style to touch the hearts of everyone she meets. Kimberly loves dogs, kids, and owls. Her... more