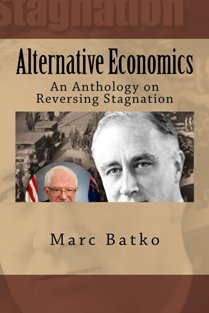 Dear Friend Reviewer,
I am a freelance translator living in Portland OR.  This 150-page anthology has translated articles by Austrian, Swiss, Polish and German economists who could lead us to a future-friendly economics respectful of human nature and the rights of nature.  Mainstream neoliberal economics has no answer to exploding inequality and destruction of nature.
Reviews are essential.  Without reviews, books often remain obscure and unknown.
This anthology is now available through Amazon Kindle and CreateSpace.  On my website www.freembtranslations.net, I offer 800 translated articles on the economic crisis.
I look forward to your email and your review.
Marc Batko
Portland OR

Alternative Austrian, Swiss, Polish and German economists can alert us to the bankruptcy of austerity policy and fiscal policy aiding capital at the expense of workers and the environment. The future economic policy must be regional and decentralized. A post-materialist economy is possible as we transition from excess to access and more to enough. Work, health, strength, security and happiness can be redefined. The rights of nature can be respected in a future of moderation, equality and freedom.

More and more is produced with fewer and fewer workers. Work and income have uncoupled as people cannot survive on their earnings from work and depend on credits and loans. Reducing working hours is a response to increased productivity and is the only way to assure everyone of the right to meaningful work. Reducing working hours, as Michael Schwendinger explains, is a socio-economic investment that protects long-term health interests and gives people more time sovereignty
Here is an thumbnail outline of several alternative economists. Peter Ulrich is a Swiss economist. The economy must be embedded in society. Society must not be embedded in the economy. Ulrich Thielemann is a Swiss and German economist. Profit making is not profit maximizing. Studying economics today is like brainwashing. Tomasz Konicz is a Polish economist. The 30 year crisis is not an Obama crisis. Wages were stagnant for 35 years. Credit was expanded. Families worked 3 or 4 jobs. Health care, education and housing became unaffordable. The US became a black hole for the global economy.

Three Poems for the New World

A. ALTERNATIVE ECONOMICS: PLURALISM AND THE PUBLIC INTEREST

1.  Ulrike Herrmann:  The Crisis of Economists

Causes of the Global Financial Crisis

4.  For the Renewal of Economics: Memorandum of Shocked Economists


B. ALTERNATIVE ECONOMICS: SHRIVELING THE FINANCIAL SECTOR AND EXPANDING THE PUBLIC SECTOR

2.  From the Debt Showdown into the Recession

4.  Democracy in Crisis: The Terror of Economy is a Danger to Democracy

8.  Tea Party: Extremism of the Middle

10. Ways Out of Capitalism

2. Mohssen Massarat: The Military-Industrial Complex is the Greatest Threat for World Peace in our Time

Other books by Marc Batko