Philosophical Reflections on the Economic Crisis 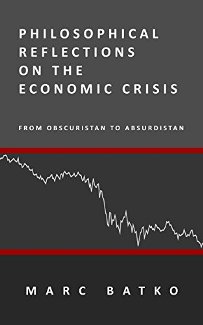 Nine essays and three poems are offered to awaken interest in philosophy and economic theory. Mainstream trickle-down economics is helpless in reversing exploding inequality and precarious work. We could all be "cloud workers," editors, translators, writers, aggregators and synthesizers in the new digital world!

Education is the great transformer, said the renowned economist John Kenneth Galbraith. The truth will set us free but the truth is a process, not a cudgel. Truth must well up within us and cannot be imposed or decreed from the outside. The event of understanding is a fusion of horizons, said Hans Georg Gadamer, where prejudice and misunderstanding give way to enlightenment and new life.

I wrote these essays to share the philosophical and theological wonderment which is part of our common collective legacy. Franz Kafka said words could be an ax to crack the frozen soul. Plato warned that people in the allegory “The Cave” could mistake image and reality and then chase critics or the enlightened out of town. Dostoevsky said people would surrender their freedom to the Grand Inquisitor for his promise of happiness. Rousseau said people were born free and are everywhere in chains. In “Escape from Freedom,” the social psychoanalyst Erich Fromm said people were susceptible to the authoritarian temptation because of the natural fear of the new and the fear of the unknown. He focused on the social and economic entrapments that allow neoliberal totalitarianism to be “without an alternative.”

Philosophy’s challenge is to provoke conventional wisdom, myths, and fairy-tales that lead individually and collectively into a two-inch world with false securities and generalized self-righteousness, drunken coachmen and a system that is allegedly not responsible. In his poem “The Egg,” Gunter Grass said we were born in an egg and our life project is to break the shell.

www.grin.com offers reading samples for its 193K eBooks and dissertations. A universe of knowledge and enlightenment opens up. www.linguee.com is a translation service par excellence. Suddenly, everyone can be a researcher and/or translator!

United States
I am a freelance translator living in Portland OR. Over 800 translated articles await you at www.freembtranslations.net
Learn more about Marc Batko