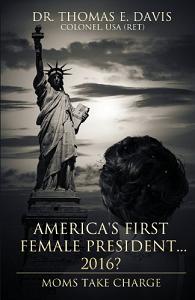 In his new book on American politics, “America’s First Female President . . . 2016?” Monroe Township author and retired Colonel Dr. Thomas E. Davis shows readers how men have dominated the nation to its downfall and how a female leader can change the situation.
Women have been an integral and essential segment of the American people since 1608, yet not one has ever been considered worthy of the high honor of serving as the nation’s chief executive. The remainder of the world has seen fit to choose a female to serve as their head of government at least 57 times. The American woman has, through experience, observation and that innate quality, motherhood, acquired the optimum skills and strength of character to serve them and the county well and honestly.
In this book, Dr. Davis reveals that men have proved just the opposite in the years since 1787 when the Constitutional Republic was born. Forty-four administrations and 43 presidents later, USA finds the government uncooperative, unwilling to take time to solve all the nation’s problems. The country is in some 16 trillion dollars in debt and spending more than what is earned. The male-dominated political milieu has proved to be selfish, party-oriented, factional to the point of being extra or even anti-Constitutional. Dr. Davis presents that it is just a matter of time that an American female will, of necessity, be elected president of these magnificent United States of America.
Published by Tate Publishing and Enterprises, the book is available through bookstores nationwide, from the publisher, or by visiting barnesandnoble.com or amazon.com.
Dr. Davis is a retired Army officer (colonel) and educator. He drew his inspiration for the equal rights for women from his paternal grandmother, herself a schoolteacher, who learned the Indian languages of the Five Civilized Tribes, established a boarding school for Indian boys and taught them English, reading, writing, ciphering and civics.
For more information, please contact Michelle Whitman, publicist, at (877) 727-0697 or send an email to michelle[at]keymgc.com.
Buy on Amazon
America's First Female President...2016? | Paperback Edition
ISBN:
978-1530855537