Because of You, We Live! 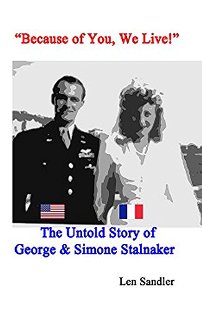 As Nazi Swastikas blight the landscape of most of Europe during World War II, Simone de Cruzel, a 19-year-old socialite living on  the French Riviera and daughter of a Provincial Court Judge, is a spy for the British with the code name of "SISTER." At the same time, she  takes to the streets with a rifle in hand as a member the French Resistance, fighting against her country's occupiers. After many successful missions, her identity is compromised.  Captured and imprisoned in a cell so small she cannot fully stand up, Simone is forced to subsist on bugs and worms from the floor along with an occasional cup of broth, often filled with lice.  She awakens every morning for months waiting for her name to be announced at each “5 a.m. Death Call.”

Meanwhile, an American from Iowa and son of a preacher, George Stalnaker graduates from West Point and earns his wings.  After completing 35 combat missions and quickly rising to the rank of Lt. Colonel, his B-26 bomber is hit by enemy fire and loses its right engine. With the left engine failing and the plane rapidly losing altitude, the mission of destroying the last remaining bridge the Nazis could use to reinforce their troops at Normandy is completed before the crew is forced to bail out.  They accidently, however, choose the worst possible parachute target - Gestapo HQ.  The aircraft banks sharply, stalls, spins out of control, and explodes upon impact with the ground.    A brave French boy races his bicycle to the site where he sees George’s parachute come down, hoping to reach him before the Germans.

George and Simone may be people born worlds apart but they are alike in one important way – heroism is in their DNA. This is the epic true story of how this remarkable couple manages to survive, meet, and fall in love.

United States
Over the past 28 years, Len has successfully developed and delivered close to 3,000 leadership seminars for such organizations as IBM, NASA, GEICO, General Motors, EMC, Siemens, AT...
Learn more about Len Sandler