My Discovery of God's Grace Amidst Chronic Pain and Loss
Book by M. Rose Peluso 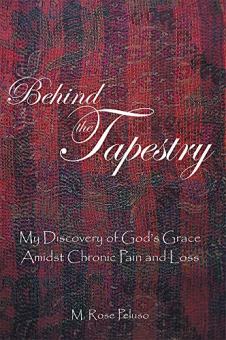 Behind the Tapestry is the Award-winning, compelling true story told from behind convent walls, of one woman’s struggles to “make peace” with a mysterious chronic illness and her unfulfilled dream of being a Catholic nun.

Maryanne was a 29-year-old graphic designer working towards a lifelong desire to someday move to Hollywood and become an Academy Award winning art director. But an unexpected invitation to a Catholic prayer meeting would forever change Maryanne’s life showing her desires she didn’t know she possessed.

After being abruptly fired from her job and spending a lot of time in prayer, Maryanne embarked on a journey to discover God’s will for her life. This quest eventually led her to the Catholic Convent and the realization that all she’s ever really wanted was to devote herself to Jesus.

Entering Religious Life was all that Maryanne thought about for more than a year but there was a problem. She found herself plagued by a mysterious condition that caused widespread, chronic pain. However, in spite of this pain, Maryanne joined a group of Franciscan Sisters in 1999.

Her life in the Convent was filled with many questions, struggles, challenges and a whole lot of physical pain. Then when already strained relationships with her superiors became even more fractured with the lines of communication practically severed, Sister Maryanne was forced to make a heart-wrenching decision. One that would not only impact her life but the lives of those around her. Should she remain in the Convent and go on to take final vows or leave her Religious Life behind and take care of herself instead?

This memoir takes the reader on a journey into the heart and mind of the author. M. Rose lets us in on her unique experience of severe chronic pain, her struggles with loss, and her unforgettable discovery of God's never-ending love and mercy. This is one memoir you won't be able to put down. It is both heartbreaking and uplifting all at the same time. Pick up a copy of this Award-winning book right away to find out how God calls each of us to live "Behind the Tapestry."

M. Rose wrote this book to help other chronic pain sufferers like herself. Her rare, debilitating chronic condition is known as pudendal neuropathy. This condition is life-changing and not in a positive way. There is very little out there about PN. Most books written about PN are not personal accounts of what it is to struggle and live day to day with this awful condition. This was M. Rose's primary motivation in wanting to share this most personal and intimate story. If you are a chronic pain sufferer and especially if you suffer specifically from pudendal neuropathy, M. Rose wants you to know that this book was written for you. She prays for you and hopes that you will gleam some hope, inspiration, and encouragement from her story. God Bless! United States
M. Rose Peluso is a former Catholic Religious Sister, Educator & Graphic Artist. “Behind the Tapestry” is her debut book. Her poem entitled, “The Meaning of Friendship” was featured in Sparrowgrass Poetry Forum’s Poetic Voices of America Anthology, Summer 1991. She's been a chronic pain sufferer for over 22 years.
Learn more about M. Rose Peluso