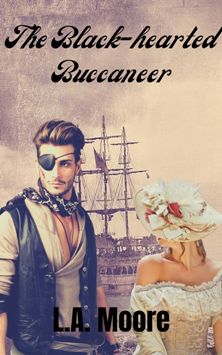 One woman, one pirate, and a lunatic hell bent on destroying both.
​
After the death of her parents, Adrienne inherits all their money. She seeks comfort in her fiancé Jacques, but then she discovers he murdered her parents. In an attempt to leave, Jacques tortures her to get her to marry him. Barely escaping, Adrienne falls into the arms of Devon. Someone she hates and yet is drawn to.
​
Jacques's only love in life is money and brutality. Yet it's Adrienne's money that truly stirs his lust. He is determined to marry her even when he finds out she is with the notorious Captain Devon, the demon pirate.

​Jacques concocts a plan to get her back at all costs.

Devon is instantly drawn to Adrienne and although he is hiding a secret from her and only wishes to remain single, he decides to help her. The two struggle with their opposing feelings for one another.

​When Jacques kidnaps her off Devon's ship, will Devon be her swashbuckling pirate rescuer; or will it be the ghost of her future who saves her before it's too late?

​If you enjoy historical romances with a touch of supernatural, you will like The Black-hearted Buccaneer.

Buy today and be captivated by Adrienne's story! United States
Hello I am a stay at home mom with a wonderful husband and three amazing teens which I homeschool. In my spare time I enjoy spending time with my family and pets, painting on glass, reading, crocheting, and last but not least, I love to write. Writing is a passion for me as well as therapeutic. I feel that writing offers me a way to express myself in ways that I find difficult otherwise and...
Learn more about L.A. Moore