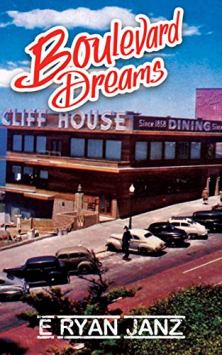 In this intelligent, dark humored, anti-noir mystery set in 1958 San Francisco, a down and out private eye, Joe Nails, experiences surrealistic dreams, in which his once best friend, Mark Tamlyn, pleads for Joe’s help before turning a gun to his own head and firing. To ease his doubts, Joe sets out to locate him, and discovers Tamlyn vanished weeks before the dreams began.

As his investigation deepens, Nails uncovers a conflicting portrait of Tamlyn rendered by people who knew him best; from those intimating his disappearance is customary, to those hinting he is on the lamb from mobsters, and to the several who insist he is dead.

But Joe wants the truth, and becomes embroiled in an encircling world of murder, deception, and confusion, and as the road narrows toward the shocking reality of his friend’s fate, Joe Nails finds himself staring into the dreadful face of the unimaginable.

I experienced some nondescript dreams concerning my best friend for many of my schoolboy years, but who I had not seen or spoken to for most of my adult life, and so I decided to look him up, starting online by delving into our high school reunion yearbook for further information of his whereabouts. Shockingly, and quite devastatingly, I found he died many years before at a fairly young age, thereby inspiring the genesis of this story. And although the novel completely departs from what I knew of him, whenever I look at the book, I think of him, and with enduring fondness.
My love for great film noirs of the 30's through the 50's inspired much of the rest, especially The Maltese Falcon, The Big Sleep, and Kiss Me Deadly, but I held no interest in duplicating them or the novels upon which they were based, desiring to inject as much dark humor into the story, the characters, and the dialog as would allow while hopefully still maintaining some semblance of a noir.
In the end, I was truly inspired to create this book, in fact, shortly after learning of my friend’s death, I broke away from the novel I was writing in favor of Boulevard Dreams, but ironically, while I’m composing these notes, I’m wrapping up the novel I broke away from with intentions on releasing it in November.

United States
My name is Ryan Janz and I’m the winner of the 2019 Nobellle Prize for Literature.* But this honor doesn’t deter me from traveling the land with my wheelbarrow and faithful dog to disperse to friendly passersby the 500,000 copies I’ve acquired of my clever mystery, Boulevard Dreams. Thus far I’ve distributed an impressive four books, and each of those four people joyfully scurried into...
Learn more about Ryan Janz