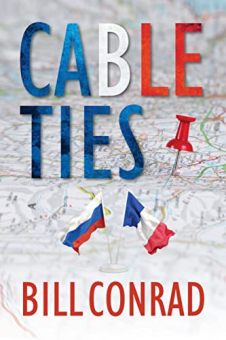 When two hunters in the woods of Clearwater, Georgia, stumble onto an underground bunker filled with sophisticated information-gathering equipment, the FBI sets up surveillance to discover who has been stealing sensitive national secrets.

As clues point to double-crossing operatives in cahoots with French and Russian agencies, FBI director Russell Norton has no choice but to assign disgraced agent, Jeff Kelley, and a team of green academy trainees to unravel the most destructive foreign intelligence operation in United States history.

Before long, the CIA, NSA and MI6 are involved, and Kelley and his team, along with officials at the highest levels, must scramble to disable foreign data centers and bring to justice an intricate web of conspirators at home and abroad.—Without sparking World War three and setting intelligence back fifty years.

The sequel, Cable Pairs, followed by Cable Ways will be available soon. United States
Bill Conrad grew up in San Diego, California, and attended college at Worcester Polytechnic Institute in Massachusetts. In 1993 he received a bachelor’s degree in electrical engineering with an English minor. From an early age, Bill had a passion for writing, but the prospect of creating an entire novel seemed impossible. Unemployment provided the golden opportunity to put his thoughts...
Learn more about Bill Conrad