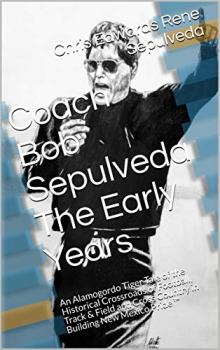 “Everything I do in track and field as a coach; from organization to training of athletes, I learned from my years with Coach Bob Sepulveda.” -Dale Lindley, Coach Chaparral Junior High

Coach Bob Sepulveda, New Mexico Coach of the Year for boy's track; 1982, 1991 and 1996. Received the NHSACA Region 8 Coach of the Year in 1982, 1991 and 1996, Section 6 Coach of the Year in 1991 and 1996. Along with his wife Marilyn, both, received the New Mexico High School Coaches Association Level IV Coaching Milestone ring in 1989. He and his wife Marilyn were inducted into the Alamogordo Tiger Hall of Fame in 1988. Coach Bob Sepulveda was named the head track coach in 1969 and during his 27 years as head coach his teams won 19 District Championships, 5 State Championships, 1 second place finish and 5 third place finishes. His teams also won 170 Invitational Track meets. He had 102 athletes win a first place medal at the New Mexico State Track Meet.

This book series, beginning with book 1, is an Alamogordo Tiger Tale of the Historical Crossroads of Football, Track & Field and Cross Country In Building New Mexico Pride. Co-written by authors; Chris Edwards & Rene Sepulveda, the book series begins with the Alamogordo, New Mexico athletic program in 1916 and progresses through today. The focus is on the Track and Field and its paths that crossed into interscholastic football and cross country. The book is a comprehensive history that tells the stories of the many personalities from 1916 to 1996 that influenced New Mexico interscholastic sports in Track and Field, Cross Country, High School Football and beyond. Coach Bob Sepulveda had the longest consecutive State Track & Field Winning streak in the 90s of any New Mexico Coach. The book highlights the records and the stories of hundreds of athletes.

The book series takes on the tough issues of the launch of national high school interscholastic sports standards, integration in the 50's and 60's, Title IX implementation and girls interscholastic championships, the politics around high school football and more. The book series contains the records of 100s of high school athletes, rich in dialog and interviews with athletes, coaches and community members. It tracks the successes and failures of some great athletes & coaches. The central characters in the book are Coach Bob and Marilyn Sepulveda paired with a variety of characters that played a role in the program success of the Alamogordo New Mexico Track and Field, Cross Country & Football programs. While the story is focused on a small town in New Mexico; it is national in scope; as many associated coaches and athletes had a national or international influence in athletics, politics and world events with the common theme of all being touched by the Alamogordo Track & Field, Cross Country or Football programs, Coach Bob Sepulveda and his legacy

Stories include interviews and first hand accounts of athletes and coaches some of which went on to the NFL, Olympic Trials, professional or political successes. No book would be complete without some tearful stories with tragic endings but overall this book will educate, inspire and remind each of us of the good within each of us. Coach Bob Sepulveda, the central figure spent his entire adult life (30 years at Alamogordo High School)- imparting qualities in athletics that are supposed to carry over into life: teamwork, dedication, punctuality, leadership, sacrifice and poise.

He’s certainly not alone, but his character, integrity and influence, on so many people, goes well beyond the geographic bounds of Alamogordo or New Mexico. His story is one of hope and inspiration as is the story of his many athletes. “Coach Bob Sepulveda is just a good, hard-working coach and a good responsible person who cared about the kids in his charge. That for anyone who’s paying attention, is all the message that’s necessary”, per a Commentary by Rich Wright Assistant Sports Editor, The Albuquerque Journal.

This book was written during the height of the Covid-19 pandemic and the shut down of all interscholastic sports across the country. During interviews with athletes and coaches it was inspiring to hear their stories and motivations yet sad that the health of the nation has placed competitive athletics and the dreams of so many on hold. The more stories I was told the more the book expanded and inspired thus it is now a 3 book series. Book 2 will be released in August and what was a track and field book expanded to multiple sports on multiple coaches, athletes and sub-stories. Now more than ever an inspiring book like this is needed. Coach Robert Sepulveda The Early Days includes stories and interviews and records of 100s of athletes and is sure to inspire even in the darkest of days.

About Chris Edwards and Rene Sepulveda Coach Sepulveda was a great influence in my life as a student/athlete at Alamogordo High. He could always push you to bring out the great in yourself. He’s one of the main reason I was able to get a scholarship attend college and move on to the next level in Track & Field (javelin). I appreciate him as a legendary coach and great motivator. Thanks Coach

Days of Miracle and Wonder