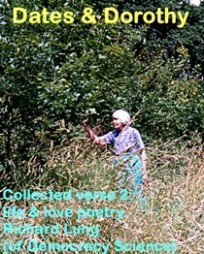 One bit of luck I had was to meet Dorothy Cowlin, who is the Dorothy of the book, Dates And Dorothy. I had studied English literature, mainly poetry, at sixth form college, as it would now be called, but her writing and reciting her own verse brought a new kind of poetry, mood poetry, alive to me. She was too self-effacing to take on the formal role of teacher, which had been her profession. But I owe her this extra dimension to my repertoire.

The first half is a literary appreciation of Dorothy Cowlin, the novelist and poet. The second half is the second volume of my collected verse. It includes a section on my friendship with Dorothy.

Because we are of different generations, the whole work comes together as a sort of personal memoir of the twentieth century. The pre-war events are studies of Dorothys early life and literary journey. The post-war reminiscences are mostly supplied by my memories.

The Dates have a double meaning, being year-by-year recollections, largely incidents that stood out from the blur of events, as well as dates in the romantic sense. A further section is on the romance of religion, as GK Chesterton called it.

At Smashwords, this book is available at reader-sets-the price.

It's fifty years to the year since I parroted the conventional wisdom about British elections by First Past The Post. I could see nothing wrong with it. I didn't think it was necessary to study proportional representation. Being a student, I had to make some show of reading-up on it. The central reference library proved not devoid of copies, from other students, who had ample time to get there first. I thought I was lucky to lay hands on such a distinguished work, as Elections and Electors, by JFS Ross. I still think so. After a few years thinking the subject had nothing to do... more