Death of an Idiot Boss 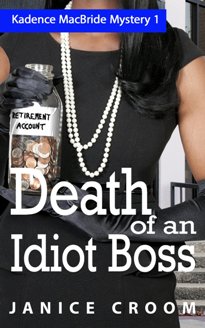 Ever had a boss you'd happily kill?
Somebody beat her to it.

Super ambitious Kadence MacBride is smashing the glass ceiling with her size ten pumps, or so she thinks. She not only doesn't get promoted, the promotion she thought was hers goes to her idiot employee, and he becomes her new boss.

Worst day ever, or so she thinks. Worst doesn't have a floor, and idiots tend to get themselves killed.

There are some things you don't delegate. Adding amateur sleuth to her resume, Kadence sets out to find the real killer. Between unearthing Civil Rights era secrets someone desperately wants to keep buried and fending off a cop driven by expediency over truth, Kadence may end up trading her red power suit for an orange jumpsuit.

If you like your cozies with a side of attitude, you’ll love the Kadence MacBride Mysteries.

Death of an Idiot Boss - Available from Amazon