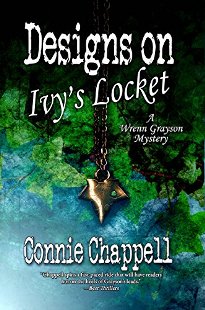 Historian-for-hire Wrenn Grayson takes on a difficult client in Kerry St. John. Kerry seeks justice for his great-grandfather’s lifelong heartache. Wrenn meets the renowned jeweler through words recorded in his tattered journal. The year is 1946. He writes from the tiny crossroads of Wyatt, Ohio, about the theft of a treasured locket and the identity of three possible suspects.

The cold case heats up when Lori Hammond arrives. The stolen locket was discovered among her mother’s possessions after her death. Lori refuses to return it to the St. John family, so Wrenn sets out to follow the locket’s path through history. Next, Lori is attacked and Kerry accused. If Kerry’s not guilty, then who is? That question sends cold whispers from the past down Wrenn’s spine.

In Designs on Ivy’s Locket, Connie Chappell focuses on the theme of parents and children, separated by death, by theft, and by design.

Wrenn Grayson is a historian-for-hire in her hometown of Havens, Ohio. Best Thrillers claims Wrenn’s one-of-a-kind investigative process will have readers flipping pages in her fast-paced mysteries. Designs on Ivy’s Locket takes readers into the world of small-town Ohio and its... more

Other books by Connie Chappell