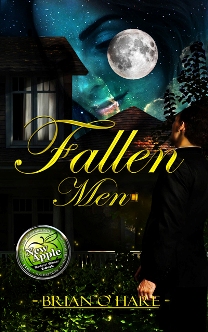 A young priest's life spirals out of control when long-submerged memories of childhood abuse begin to surface. He seeks solace in a friendship with a beautiful seventeen-year-old-choir girl but this leads to a doomed love affair that ends in disaster. Fallen Men touches on some dark themes but it is ultimately a novel of redemption. It has won the Amazon IDB Award in January, 2013.

Some significant critics have this to say about the book:

"Great story…I could not put it down when I got to the second half. Well written, great characters. The psychological aspects are key.” Stephen Frankini, Publisher, Tumblar House Books.

"O’Hare has a pleasant, easy-to-read writing style. I have written five books and edited five others, so I realize the hard work and effort that go into writing a full length novel...There are aspects of this book that I thoroughly appreciated. The topic of sexual abuse is dealt with sensitively. There are no attention-seeking graphic descriptions. The flashbacks of child sex abuse and the depictions of the depression, guilt and breakdown after a rushed abortion are particularly well done. I found the court sequences to be believable and compelling. This is definitely an author with natural storytelling ability."
Ellen Gable Hrkach, Reviewer, Catholic Fiction

“A story that is both current and gripping. It has distinctive and credible dialogue and beautifully forged characters. It is clear that the writer is a keen observer of human nature. I genuinely enjoyed reading this book.” John Anthony, Publisher, Pink Cloud.

Brian O'Hare, MA, Ph.D., is a retired assistant director of a large regional college of further and higher education. He is married, has three children, ten grandchildren, one great grandchild. He plays golf three times a week off a ten handicap and does a lot of voluntary work. Any writing he has previously done was academic.
He had a liver disease since childhood which resulted in his taking early retirement a number of years ago. In 2002 he had a liver transplant but is strong and healthy now. He continued to do academic writing well into his retirement, e.g., book-length... more