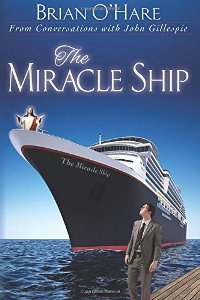 YOU WON'T BELIEVE WHAT YOU'RE READING BUT EVERY WORD IS TRUE!! Do you believe in miracles? Do you believe in demonic possession? Do you believe in exorcism?
A little girl with irreparable brain damage was pronounced dead by two hospital specialists. Today she is a healthy teenager. A teenage boy whose spine was crushed by a lorry was diagnosed as permanently paralysed. He now plays football with his friends. A curse that brought death over five generations has been lifted. People tormented by demons have been set free. How were such miracles wrought? What do they have in common? They have John Gillespie in common. Who is he? How has he been gifted with such extraordinary power? The Miracle Ship tells John’s story. But it does so much more than that. Yes, the book essentially focuses on miracles. Yes, it contains many extraordinary stories of healing and deliverance. Yes, it focuses strongly on the spiritual warfare that so many Christians are engaged in without any awareness of its dangers. But the book goes to the very heart of what is needed to find healing and deliverance. It tells of the obstacles and difficulties that get in the way of true healing prayer. It reveals the many pitfalls that lie in wait in seemingly innocent healing practices. It spells out in detail the serious dangers that underpin many apparently beneficial New Age therapies. And it offers many examples of the kinds of prayers and life-styles that can bring healing to the body and to the mind. It can even turn around lives that are falling apart (and this has already been several times communicated to the author or John Gillespie by people who have already read this book on Kindle.)
This is a book that should be read by all Christians. John’s message is profoundly insightful and, if it is uncompromising, it is laced with faith, forgiveness and truth. Many who have already read the book have described it as ‘life-changing.’ This true account of his life, of the miracles and deliverances that follow his prayers, will amaze you. Millions of people love to hear and read about miracles. Sr. Briege McKenna’s book Miracles Do Happen has sold all over the world in its millions. If you read and liked Miracles Do Happen, you’ll love The Miracle Ship.
The Miracle Ship - Available from Amazon

Brian O'Hare, MA, Ph.D., is a retired assistant director of a large regional college of further and higher education. He is married, has three children, ten grandchildren, one great grandchild. He plays golf three times a week off a ten handicap and does a lot of voluntary work. Any writing he has previously done was academic.
He had a liver disease since childhood which resulted in his taking early retirement a number of years ago. In 2002 he had a liver transplant but is strong and healthy now. He continued to do academic writing well into his retirement, e.g., book-length... more