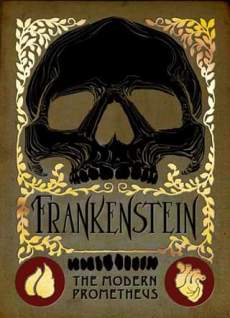 Mary  Shelley’s Frankenstein like you have never seen it before!

What began as a competition amongst friends, lovers and Romantic poets resulted in a dream that inspired one of the classic novels of English literature.

While traveling through Switzerland at the tender age of 18 with her future husband Percy Shelley and Lord Byron, Mary Shelley won the friendly competition to write the best horror story. Mary dreamt about a scientific experiment gone wrong at Germany’s Frankenstein castle, which she visited just days before, and the resulting story evolved into an iconic novel of the Romantic era.

Ethereal Visions Publishing features the artistry of Matt Hughes, and has created a collectible edition of the 1819 novel that is sure to become a treasured family heirloom.

Each chapter header is accompanied by four hand tipped-in color plates that reveal the journey of the monster from conception to birth to self-awareness and finally to the acceptance of mortality and solitude.

Never before has such an artistic interpretation of this character been produced. This edition will be the first in a three part series focusing on the creators of what we today call horror - the next volume will be an Illuminated edition of Bram Stoker’s Dracula.

United States
Ethereal Visions Publishing recreates literary classics through the artistry of Matt Hughes. Beloved books become collectible editions that will pass along the magic of great literature and art for generations of your family. Ethereal Visions Publishing emerged from the love of beautifully illustrated books. The love of art coupled with the love of books was the spark which lit the fire...
Learn more about Matt Hughes

The Book of Botanical Tangles

How to Draw Animals for Kids

How to Draw for Kids