A tragic tale of the Spirit versus the Flesh 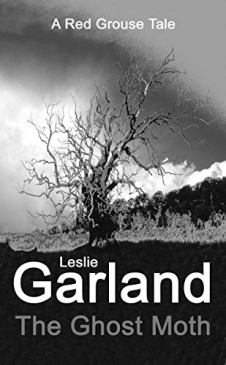 The Ghost Moth; a tragic tale of the Spirit versus the Flesh.

As Joe reads an old folk tale and is drawn into a world of religious fanatics, witches, angels and she-devils, he begins to wonder if it is possible that this five hundred year old story of a young monk and his lover could impact on his family in the present day?

A story about the desires of the sexes and the doctrines of religion, with hints at the supernatural and beautiful and atmospheric imagery, this controversial, adult, speculative, spiritual and philosophical tale will intrigue, entertain and keep you guessing in equal measure up until the last page.

(Warning to sensitive readers; the story is an adult one and so deals with adult themes. It contains what some might find to be controversial views on both religion and sex, as well as mild sex scenes.)

Three main ideas came together to prompt this story; religious fanaticism, ‘me too’, and the idea of a location being cursed as the result of something having happened there in the past. Perhaps a strange mix, but I hope they make for an interesting tale.

We tend to forget history all too easily. So I thought it would be as well to remind ourselves that Christianity used to be just as misogynist, intolerant and barbaric as anything we read about in our newspapers these days. For a religion which is supposed to be about love and tolerance one does have to wonder where this came from. Of course religion and sex always seem to have been at loggerheads, but why? Possibly it had / has something to do with the fact that men were / are primarily instrumental in creating religion, whereas women were / are more concerned with creating offspring. Saint Paul observed in Galatians 5.17, ‘For the flesh lusteth against the Spirit, and the Spirit against the flesh: and these are contrary one to the other: so that ye cannot do the things that ye would.’ So are the innate differences between male and female those which drive the differences between spiritual desires, or perhaps we should say religious doctrine, and sexual desires? And how did these become as extreme as they did? In order to dig into possible causes, I necessarily had to look at the lives and writings of some of the early saints so as to, I hope, shed some light on this.

Back in those very early days and the later days of yore, women’s rights were all but non-existent and religious misogynists could brand a woman as a she-devil or witch and hence condemn her as such just because ….. well, was any real hard evidence actually necessary? And it stuck me that the ‘me-too’ movement was in great danger of doing exactly the same to men these days, with a woman throwing out an unsubstantiated accusation, which all have to take on trust, about a supposed event which took place years previously and which she had said nothing about at the time. Yes, we know men exploit women, but women also exploit men and this appears to have been forgotten. The exploitation may take a different form, but it is exploitation nonetheless and this of course feeds back into the conflict between the Flesh and the Spirit, and so I wanted to include this in my story.

Although the tale was going to be a work of fiction, I wanted to base as much of it as possible on ‘things real.’ The description of the present day ruins of Blackacres Monastery is loosely based on those of a monastery here in Northumberland. The ‘stone road’ leading from it and general description of the countryside are all based on local Northumbrian reality. A family visit to a wooden sculpture of a giant head, which one can go into, coupled with some truly bizarre looking trees (the image used for the cover was taken in North Yorkshire) resulted in both gradually morphing in my imagination into the tree in this story. And the lepidopterists amongst you will know that Ghost Moths (Hepialus humuli) do exist, and with a name like that I couldn’t miss using one as an avatar in the story and so its name as the title of this tale.

I have tried to ensure that the bibliographical and historical elements are correct and offer my apologies if anything mentioned is not so. Whereas I realise that the views expressed on both religion and sex might be considered by some as controversial, I have endeavoured to be as even-handed as possible. However, I can assure you that the quotations cited are very real and hence are referenced, so I hope there will be no controversy about who said or wrote what!

Although perhaps we might like to wish that the day will come when ‘the flesh ceaseth to lust against the Spirit, and the Spirit against the flesh’ this seems unlikely, because, as Saint Paul said nearly two thousand years ago, ‘these are contrary one to the other,’ as of course are the innate desires which drive both male and female.

Other books by Leslie Garland

A Story on Heaven and Earth