Gnarled Bones and Other Stories 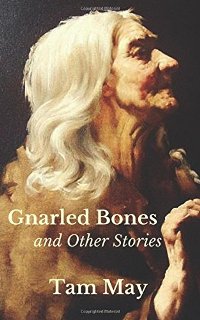 Gnarled Bones and Other Stories is a collection of five short stories where strange and spooky events affect people’s lives in ways they could not have anticipated.

A newly divorced woman goes back to school to begin a new chapter of her life only to find herself circling back to where she started. A mailroom secretary and her friends spend a day at the circus where childhood nostalgia mingles brutal fear. A lonely woman ventures out of her isolated apartment one quiet Saturday afternoon to an art exhibit that leaves an eerie imprint on her psyche*. A middle-aged violinist reveals the mystery behind his declining artistic powers to a stranger on a train. And the title story weaves journal entries and first-person narrative to paint a picture of the complicated bond between an orphaned brother and sister.

These stories leave an impression of how the past shadows the present and future.

* This story was featured on Whimsy Gardener’s Storytime With Whimsey and can be found here: https://www.youtube.com/watch?v=PW9mgw4qhuA.

I wrote three of the stories in this collection - “Mother of Mischief”, “Bracelets” and “Broken Bows” - during a very difficult time in my life. I was going through a family crisis and I had also just moved out of San Francisco to the East Bay. The stories were sort of a spark for me, when I finally got the courage to write about some of the emotional issues that I was going through and the revelations I was having about my family and my life. I was studying feminist psychology and going through therapy as part of my program. I felt that since this was my first book, it would be fitting to start with those three stories. The two other stories, “A First Saturday Outing” and “Gnarled Bones”, came later in my life, once I worked through some of my demons and stopped trying to fight or avoid them. I felt they could be included because they were more mature works in terms of how they reflected psychological reality.

Tam May was born in Israel but grew up in the United States. She earned her B.A. and M.A degrees in English and worked as an English college instructor and EFL (English as a Foreign Language) teacher before she became a full-time writer. She started writing when she was fourteen and writing became her voice. She writes psychological fiction, exploring characters’ emotional realities as informed by their past experiences and dreams, feelings, fantasies, nightmares, imagination, and self-analysis.

Her first book, a short story collection titled Gnarled Bones And Other Stories, was... more

Other books by Tam May