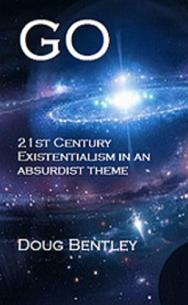 Major New Contribution to the Theatre of The Absurd!
We are done "Waiting For Godot"!
A full length 4 Act theater script, 'GO -21st Century Existentialism In An Absurdist Theme' is based on the landmark play by Samuel Beckett 'Waiting For Godot'.
First produced in 1953, 'Waiting For Godot' painted an indifferent universe, meaningless and random. Within it, Beckett's tramps, VLADIMIR and ESTRAGON, waited frozenly, in hopelessness, for the non-appearance of their transcendent, passive Godot. Positing major advances since that play, 'GO'’s tramps, BLIND and GOGO, actively participate in a meaningful kosmos. Their universe is "open at the top."
A serious exploration of contemporary existential angst, 'GO' is a modern contribution to the theatre of the absurd, a global genre transcending cultural lines!
Employing technical economy in all aspects of production, 'GO' is inexpensive to produce. Dramaturges will be delighted by the minimal stage directions, stage directors by the electricity present in GO. A challenge for thespians, audiences will also be entertained and amused by its abundant humor.
Buy on Amazon
GO | Buy on Amazon (Paperback)
Doug Bentley's Website
ISBN:
978-1484880494

Other books by Doug Bentley

The Swirling Torrent of Nonsense and Other Travel Destinations