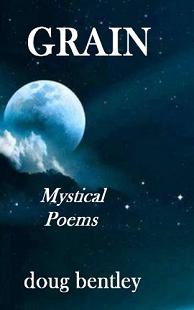 Drift Off Into A World Of Dreams Never Dreamed!
Mystical Poems of love, life, death, hope and victory!
A selection of mystical love poems, 'GRAIN -Mystical Poems' is for the mature reader whose delight is to curl up in a comfy spot by the fire and drift off into a world of dreams never dreamed. In that silent solitude, you can hear your ever-present, always already there, still small voice whisper words of inner comfort and guidance.
'GRAIN -Mystical Poems' is a selection of twenty-eight love sonnets and one long contemplation on death and dying that touches the heart directly. It depicts a sense of mysticism that drives the inner soul to find solace in a wholly different world. The poet brings about a beautiful unification of love and death which has a direct impact on the intriguing mind. The moment of death and its aftermath are amazingly portrayed and meticulously crafted so as to make anyone drift away into a world of hope.
A mature poet, Doug Bentley not only demonstrates his ability to merge the strongest of emotions. He also shows the poet’s ability to reach out to the dreamer in the present technological age and touch his heart in a very private way. As a poet who believes strongly in the power of mysticism, Doug Bentley has produced this poetry book to reach out to the dreamy soul.
GRAIN - Mystical Poems @ Amazon

Canada
Doug Bentley lives quietly in Vancouver, Canada. He is the author of four books currently available in digital and soft cover formats at major online retailers and ebookstores worldwide: - PHILOSOPHICAL FRAGMENTS OF YOUR ANCIENT NAME -a journey of self-discovery into the sanctuary of your soul - and beyond!;- A CANADIAN'S POEMS -"one of the best kept secrets in Canadian English Poetry...
Learn more about Doug Bentley