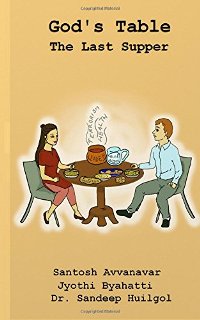 A noble couple. In noble professions. He’s a doctor and she’s a teacher.
What do they discuss over meals – breakfast, lunch, dinner? They are perturbed by the social, moral, economical and anthropological issues plaguing our country these days.

Meet Amrita and Robert, a couple who will speak on behalf of you. Witness their daily discussions on problems you think are worth talking about. Education, Medication, Elections, Corruptions, Honour Killing, Child Marriage, Social Media – you name it and the disease has already made deep wounds in our country’s body and soul.
God comes to rescue along with Amrita and Robert. Delve into the gospels and teachings of God to find a solution to each malady, if you wish to accept it.

Authors Santosh Avvanavar, Jyothi Byahatti and Dr. Sandeep Huilgo present a unique fiction in conversations to remind you how God would have faced and erased a few of our society’s key problems.

Santosh Avvannavar: Santosh started his career as a consultant and Soft Skills Trainer. He did his college education from NITK, Surathkal. He functioned as a researcher at University of Eindhoven, University of Twente and Indian Institute of Science, Bangalore. He was also the Placement President, while he was working at IISc, Bangalore. He has over 25 publications of mostly research documents that have found their place in National & International Jour- nals. Also, he has done 16 conference papers and regularly functions as a writer of different articles for a national and worldwide daily paper. He is an advisor for different organizations. He is an author of Adhuri Prem Kahaniya, Dear Wife, Your Husband is not a Superhero, Second Heart, Get a Job WITHOUT an Interview, Be a B.A., Surrogate Author, Title is Untitled, Black, Grey and White, The Departing Point. Throughout his personal time he composes his thoughts in a website and ventures into fiction writing. He delivered semi- nars and training to more than 40,000 people in India and abroad over the span of 7 years.

Jyothi Byahatti: Jyothi has done MBA in HR & Marketing from Karnataka University, Dharwad and started career as a banker with ICICI Bank Ltd. She has also worked as a Recruitment Consultant with an executive search firm. Moved on for a short stint in teaching with T John College, Bangalore in the department of Management Studies. Jyothi got involved in proof reading and editing a few books, which inspired her to start writing stories.

Dr. Sandeep Huilgol: Sandeep did his medical schooling from Karnataka Institute of Medical Sciences, Hubli and he underwent his medicine training at Mallya Hospital a lead- ing super specialty hospital in Bengaluru. During his medi- cine training he developed special interest in nephrology, which deals with kidney diseases. After having spent a year in the Nephrology department to complete his Masters at the University of Sheffield, United Kingdom he returned back to India to undergo further training in Nephrology and transplantation at Narayana Hrudayalaya, Bangalore. He has published articles on kidney diseases in National daily and an international magazine apart from academic publications and presentations. He is also part of an initiative, a journal which is trying to create a platform for the resident to publish academic articles. During his Nephrology training he has come across many patients with various problems other than medical which were more troublesome than kidney diseases. This prompted him to come up with an idea to create awareness among general public about the issue and he has given several talks to achieve this objective with which he is not satisfied yet and aims to reach a larger audience in future.

India
Santosh started his career as a consultant and Soft Skills Trainer. He is presently working as Chief Commercial Officer at QtPi Robotics. After his college education from NITK, Surathkal, he worked as a researcher at University of Eindhoven, University of Twente, and Indian Institute of Science, Bangalore. He was also the Placement President while working at IISc, Bangalore. He has over...
Learn more about Santosh Avvannavar