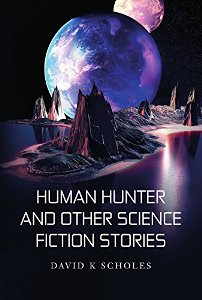 The book comprises a collection of fast paced, action packed, science fiction and science fantasy stories. The lead story “Human Hunter” is based on a story arc pod cast on the Beam Me Up Pod cast site during 2014/15.  To acquire an alien artifact an Earth organization courts disaster by illegally employing Xelk human hunters.

“Grey Power – Consolidation” looks at the world post the Young/Old War while in “The Empress Voluvita” the authority of the Empress of one hundred worlds is challenged in an unexpected way.

“Dystopian Transcontinental Journey” involves a desperate trip by an ex SAS soldier across an Australian continent ravaged by war with the alien Dreelth.  In “Living on Compressed Time” participants on the compressed time program are taken advantage of while in “Deep Web” aliens penetrate the dark web.

David has been a regular contributor to the Antipodean SF, the Beam Me Up Pod Cast and the Farther Stars Than These sites. He has also been published on a variety of other speculative fiction sites including Bewildering Stories, 365 Tomorrows, the WiFiles and the former Golden Visions magazine.

Other books by David K Scholes