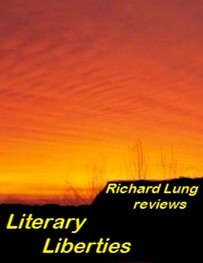 Literary Liberties with reality allow us to do the impossible of being other people from all over the world. Just as this world may be only one of many, that we cannot reach, a human version of the many worlds theory may be made a fact thru fiction.
This is a book of books or illustrated reviews spanning fiction, faction and non-fiction.
It goes some way to substantiate the belief of Benedetto Croce that history is the history of liberty.
I only wrote of books that I appreciated, so that I could pass on that appreciation to others. It must be admitted that I went with novels that looked over horizons confined to family values. (Family is, of course, a basic trial of liberty, compromised by obligations to partner and children.)

Likewise, these reviews themselves need not be bounded by the horizons of literary criticism but reach out to solutions for the problem novel or the non-fiction book with a cause.

In promoting others writings, I hoped to promote my own, or rather the liberal values that inform my writings. It took a lot more preparation than I had anticipated. This is usually the case with my books.

Literary Liberties is the first of a short series of Commentaries. This author also has a Democracy Science series. The series of Collected Verse was the first to be completed.

I put this in the category, memoir, as the least unsuitable. A category, such as "Criticism" might be better.

The ground work for this collection of reviews came from the local book club, I joined. This was the period when book clubs suddenly became fashionable, with radio, tv and movies getting in on the act.
Over the years, I had reviewed books on my own initiative, from the days, when I had to scrabble for books at local sales, a source which seems to have dried-up.