Mind Over Bullies: A MOB Forms 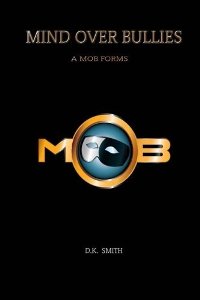 Margo is pretty, popular and unsympathetic to just how intense bullying can get. As a counterfeiting plot sweeps through the city of Oak View, life for Margo will change dramatically.

In this intricate YA tale, a group of teenagers with special skills unite to confront bullying, though they end up fighting crime, murder, and terrorism. Eventually, MOB evolves into a true crime-fighting band of superheroes.

Reminiscent of the Hardy Boys and Nancy Drew, the teens outshine adults. They operate in their own world more or less autonomously, sometimes cooperating with grownups, other times circumventing them. Filled with numerous side plots involving family history, a mysterious corporation, a rare disease, terrorist plots, and more, Smith's tale ties it all together seamlessly while continually sounding the bullying theme, which intensifies from everyday school harrying to a device for recruiting criminals. The conclusion sets up the next MOB exploit.

A native of Los Angeles, D.K. Smith began his writing career after getting news that he would soon become an uncle. Wanting to create stories and characters for his expected niece, he created the children’s book series “Sock n Boots Adventures.” The two characters (three year old Sock and five year old Boots) began to make names for themselves, generating downloads in countries around the world. From there, the love of storytelling blossomed into novels across multiple genres.

Other books by D.K. Smith