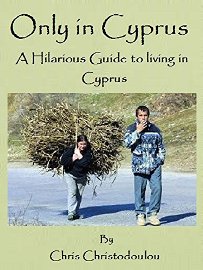 A hilarious guide to living in Cyprus.
Even if you have no intention of living in Cyprus, get an insight into an extraordinary world of chaos!
Written very much ‘tongue in cheek’ to make you laugh.
I have included many pictures that depict Cyprus life more than my words can.
Make yourself happy, make yourself laugh!

He is followed by his three ‘mini-me’s’, not quite the same weight, but catching up quickly. Two boys, probably ten months between them so they look like twins, and a daughter a bit older who will probably have to start shaving soon.
And here comes the wife, and such a contrast you have never seen! The lady is positively anorexic! A stick insect has more meat on it! It leaves you wondering how on earth they had children together; surely any sexual encounter between them would result in her being severely injured? She has her arm through Yiayias arm that can hardly walk on a hard surface never mind sand! Why are they torturing her so? I can only assume it’s to look after the ‘Weebles’.

They stake their claim by sticking a pole in the sand with an umbrella. The Dad, as if marking his territory, walks backwards dragging his heel in the sand around the pole, he claims about an Acre! This is why…

He returns to the pickup truck with the eldest weeble and comes back with three sun loungers and another umbrella. Second trip he comes back with a plastic table and four chairs. The third trip he returns with a Gazebo! Which they erect in record time as they have done it so many times. Fourth trip is the BBQ, coal and firelighters. Fifth trip are the cold boxes, one with the meat in it, one with salads and fruit, and one with the beers and other cold drinks. The piste de resistance, on the sixth trip, an amplifier, two speakers and a CD player and a small generator that will also power the two halogen lamps that come on the seventh trip! I think they are here for the long term!

Cyprus
I was brought up, educated and worked in the UK until 2004. In February 2004, I moved to Cyprus to live. Being of Cypriot origin, I had always been drawn to Cyprus, I would visit a couple of times a year, and it was always my aim to eventually retire here, and here I am 10 years on. Writing has been a hobby or pastime for me for the past 20/25 years, I found it was a great way to escape...
Learn more about Chris Christodoulou