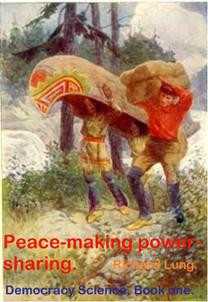 The first Canadian Citizens Assembly found out the best electoral reform, only to have the goal-posts moved against its adoption.
Britain had half a dozen undemocratic voting methods, because only that one democratic method could work at all levels of government. The world anarchy of election systems are passed off as fashion statements. But progress in democracy wont go away.
"Peace-making Power-sharing" features new approaches to electoral reform, like the Canadian Citizens Assemblies and referendums. I followed and took part in the Canadian debate from before the assemblies were set-up, right thru the referendums.
This was a democratic tragedy and an epic in the dashing of idealistic hopes.

Developments in America are reviewed.
The anarchy of voting methods, from the power struggle in Britain, is investigated, to reveal over a century of ruling class resistance to electoral reform.

A penultimate chapter gives the simplest way to explain transferable voting, on to the more formal treatment of a small club election.
The last chapter is the earliest extant version of my work on scientific measurement of elections (in French).

In 1942, HG Wells didnt err on the side of under-statement, when he said:

"Our present electoral methods, which give no choice but a bilateral choice to the citizen and so force a two-party system upon him, are a mere caricature of representative government. They have produced upon both sides of the Atlantic, big, stupid and corrupt party machines. That was bound to happen, and yet to this day there is a sort of shyness in the minds of young men interested in politics when it comes to discussing Proportional Representation. They think it is a "bit faddy". At best it is a side issue. Party politicians strive to maintain that bashfulness, because they know quite clearly that what is called Proportional Representation with the single transferable vote in large constituencies, returning a dozen members or more, is extinction for the mere party hack and destruction for party organisations."

"Peace-making Power-sharing" is a witness work. The rules of the democratic game are made by the contestants, the parties of politicians, without a referee. No sporting competition would dream of tolerating such anarchy. My work records a tiny sample of the resulting history of electoral reform as a history of sin. And like all such histories, it is full of excuses, apologies, and subterfuges, to put people off from finding out what's really going on. I don't believe it's a waste of time to try and put the record straight, tho the public be hopelessly adrift of realities here.

It's fifty years to the year since I parroted the conventional wisdom about British elections by First Past The Post. I could see nothing wrong with it. I didn't think it was necessary to study proportional representation. Being a student, I had to make some show of reading-up on it. The central reference library proved not devoid of copies, from other students, who had ample time to get there first. I thought I was lucky to lay hands on such a distinguished work, as Elections and Electors, by JFS Ross. I still think so. After a few years thinking the subject had nothing to do... more