Petty Offenses and Crimes of the Heart 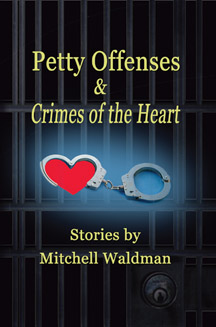 The crimes involved in the stories in PETTY OFFENSES AND CRIMES OF THE HEART may sometimes be petty – a man who leaves a bag of cat droppings on his neighbor’s doorstep after learning about his past – and sometimes involve criminal types (the career criminals in “My Life of Crime” and “Missing Pieces”). But more often the offenses involved are committed by and against ordinary people (the man in “The Nazi Next Door” who learns one evening, over a fence, that his neighbor’s father collaborated with the Nazis during World War II). And there are the mysterious offenders, such as the ambiguous interviewer in “Catching Up with Cartucci,” who unbeknownst to the interviewee, seems to have special knowledge and opinions about the latter.

Some of the “crimes” in these stories run much deeper, are of a much more emotional nature. The offenders and victims in these tales have been much more tortured than by any run of the mill crime. Such as the mother in "Fortunate Son," whose son goes missing in action while on duty in Iraq, and the father in  “The Duke of Broad Street” (nominated for a 2013 Pushcart Prize), who, twenty years after abandoning his daughter, shows up on her doorstep harboring a deep secret. Or the man in “A Ghost in Manhattan” who, during a lunch break, believes he sees his dead girlfriend in a crowd, walking the streets of Manhattan.

Threads of danger and emotional trauma run through the fourteen stories in this collection. These are the dangers and traumas that we all risk in living our day to day  to day lives, unaware of what may occur at any moment, or how our plans may be changed by the occurrence of one act, by one fateful moment. And in that moment our lives may be changed forever.

Other books by Mitchell Waldman

The Fabric Over The Moon

Joys and Woes of Marriage in India