Poetry of a Veteran Trilogy Preview 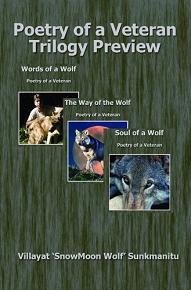 I started writing poetry in 1983, while serving with the Royal Air Force Police. It was a way of releasing some of the tension that had built up during my two year tour in Northern Ireland (1983-1985). When I left the RAF I was not told about PTSD and no diagnosis was made on my discharge medical. No one, including myself knew that I had the condition. We weren't encouraged to talk about such things in those days and suffered in silence ... much like many of us do nowadays.
After a... more