RESPECT IS ONLY HUMAN

A Response to Disrespect and Implicit Bias
Book by Israelin Shockness 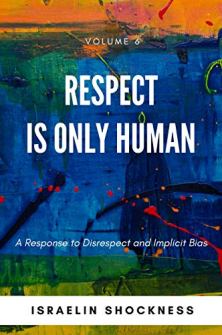 Respect is Only Human: A Response to Disrespect and Implicit Bias takes a look at our society, embedded with social injustice, revealed in racial, ethnic, religious and other discrimination, and even with hatred that threatens to destroy our very humanity, if left unchecked. This book also shows how implicit or unconscious bias, unknowingly fostered in us from our early lives, underlies social injustice and unfairness.

Respect is Only Human: A Response to Disrespect and Implicit Bias gives us the opportunity to see where we stand concerning implicit bias and empowers us to engage in reflective and critical response. It encourages us to take measures to identify and undermine the social injustice that is part of the taken-for-grantedness that is so much a part of our lives that we sometimes cannot distinguish between disrespect and respect.

This book describes how being human, or claiming our humanity, entails displaying respect for self and others and genuinely accepting difference based on race, ethnicity, gender and gender orientation, nationality, religion, physical and mental ability, and any other aspect of life.

Respect is Only Human: A Response to Disrespect and Implicit Bias is an honest, easy-to-read book, suitable for all ages, which explains how respect, a commodity that is in short supply today, can go a long way to eradicating implicit bias, racism, and discriminatory practices in our communities.

I am an avid reader and will read anything worthwhile and interesting, especially autobiographies. I have been fortunate to have written several book-length autobiographies: for a WWII pilot, a Holocaust survivor, a Christian minister, a soccer referee over his 55 years’ career, and a single mother who with an unusual childhood history brought up five successful adults on her own. I am also fortunate to be able to help many other individuals write their own autobiographies and to learn a great deal from their experiences.

My interest in writing the Successful Youth Living Series stems from my working with young people and writing a weekly column for a number of years; but the catalyst for my interest in this age group stems from my own personal experience as a young person. Away from home on a scholarship during these formative years and planning to quit school because of the actions of unthinking adults, who had good intentions, I was fortunate to have found a good mentor. An insightful professor took an interest in me, as a young person who needed some guidance, and through conversations taught me many of the lessons that I hope many young people would gain from these books. I am indebted to her, who was from a different religion, different race, different age, and a whole different worldview, and who was able to help me become an independent critical thinking young adult, ready to take on the world on my terms. My goal is to pay this forward.

Canada
I have spent several years as an educator working with students from kindergarten to university and as a former columnist for a weekly community newspaper. As a volunteer with non-profit organizations servicing children and youth, parents and the marginalized, I have held different positions as community worker and as board member. I have had the opportunity to speak to adolescent and young...
Learn more about Israelin Shockness