Science Is Ethics As Electics 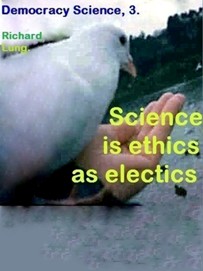 A universe, by definition independent, implies its own freedom. The debate, whether the universe is determined or governed by laws of chance, takes the opposite ends to a range from zero to infinite choice.

Science is measurement, whose logic is an increasing power of choice to give the most accurate information. Knowledge and freedom depend on each other. They are the dynamic of progress.

A greater range of choice, provided by a more effective electoral method, makes possible a wider observation of evidence on which to base a more general scientific theory.
Science and “electics” are in the same boat. Like paddler and steerer, they help each other along. They are one and the same enterprise.

My previous two books, in the Democracy Science series, show how choice, defectively institutionalised in political elections, might be liberated by scientific understanding.
This work shows how that electoral liberation may illuminate, not only formal democracy but the whole range of the sciences, whether economics, sociology and psychology, biology, chemistry and physics, or logic and language.

After studying social science, at college, I thought that election method was a good way of explaining scientific method, which could be of general use in teaching how to think. Like everything else, thinking improves with practise. Knowing how to think is like democracy. We think we know all about both, when we know little about either.
This work, "Science is ethics as electics" is my most complementary approach to scientific method and electoral method, or way to bridge the conventional dualism between science and ethics.