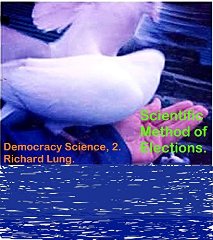 A short history shows the sheer difficulty of genuine electoral reform. The defeat of democracy is also a defeat for science. Freedom and knowledge depend on each other. Therein is the remedy. I base voting method on a widely accepted logic of measurement, to be found in the sciences. This is supported by reflections on the philosophy of science.

The more familiar approach, of judging voting methods by (questionable) selections of basic rules or criteria, is critically examined.
Political and academic justifications, for the world anarchy of voting methods, are refuted by a statistical understanding of elections as generally giving more or less probable results, for which social choice theory requirement of absolute certainty, in all cases, is not appropriate.

Official reports of British commissions on election systems are assessed. These reports are of Plant, Jenkins, Kerley, Sunderland, Arbuthnott, Richard, and (Helena Kennedy) Power report.
Two great pioneers of electoral reform are represented here, in speeches (also letters) of John Stuart Mill on parliamentary reform (obtained from Hansard on-line). And there is commentary and bibliography of HG Wells on proportional representation (mainly).

This author is a researcher, as well as a reformer, and my innovations of Binomial STV and the Harmonic Mean quota are explained.
Compared to my first book on electoral reform, this second book has more emphasis on electoral research, to progress freedom thru knowledge.
(The previous book, Peace-making Power-sharing, had a last chapter, in French, which is the earliest surviving version of the foundation of this sequel, Scientific Method of Elections.)

"Scientific method of elections" is an antidote to the stalemate theory of election methods, that they all have their advantages and disadvantages, which attempts to excuse the stagnation of democracy. The goal is elections that actually elect, as against election rules that ensure safe seats for incumbent politicians, which have acted as such a brake on progress for all.

United Kingdom
It's fifty years to the year since I parroted the conventional wisdom about British elections by First Past The Post. I could see nothing wrong with it. I didn't think it was necessary to study proportional representation. Being a student, I had to make some show of reading-up on it. The central reference library proved not devoid of copies, from other students, who had ample time to get...
Learn more about Richard Lung