Soul of a Wolf - Poetry of a Veteran 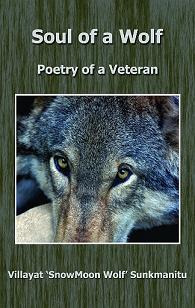 Soul of a Wolf completes the eclectic Poetry of a Veteran trilogy. The author shares some of his feelings about the constant struggle with Post Traumatic Stress Disorder, his views on life and how it affects him on a daily level. The poems portray the betrayal of Veterans by the System, alongside moments of hope, connections with nature and some romance with a sprinkling of humour.
Lynette Pinchess, Feature Writer, Nottingham Post, UK, writes:
“Raw emotions pour from Wolf’s pen. His poetry moves me to anger, it makes me sad and it makes me bitter about the injustice that he and other veterans face. But the fact that he can bare his soul in this creative manner is genuinely uplifting. Stirring stuff.”
Soul of a Wolf
Wolf Photography

I started writing poetry in 1983, while serving with the Royal Air Force Police. It was a way of releasing some of the tension that had built up during my two year tour in Northern Ireland (1983-1985). When I left the RAF I was not told about PTSD and no diagnosis was made on my discharge medical. No one, including myself knew that I had the condition. We weren't encouraged to talk about such things in those days and suffered in silence ... much like many of us do nowadays.
After a... more